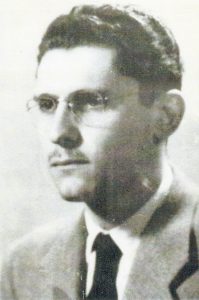 Moshe was born on 20 December, 1926, in Cairo, to Rachel (née – Mensahe) and Ibrahim (Eliyahu, Eli, Liato) Marzouk. Born to a Karaite-Jewish family, during his childhood Moshe used to join his grandfather, Rav Moshe Ben Rabi Avraham Menashe, at the Karaite-Jewish synagogue in Cairo, and sit by his side. He attended Egyptian public elementary and high schools.

Moshe was raised with a love to his nation, to Zion and the Zionist ideal. In 1945, after World War II, he underwent training, following which, he served in the Jewish paramilitary group of the “Haganah“.

During 1944-1950, he studied medicine in the research and teaching hospital ‘Qasr El Eyni’, which was affiliated with the ‘Qasr El Eyni’ Faculty of Medicine, at Cairo University, named after King Fuad I.

Moshe specialized as an anesthetist. After graduation, in 1950, his first position was at the university hospital. He then worked (1951) as a physician at the Eye Hospital in Giza, and eventually, at the Jewish hospital in Cairo. Moshe quickly gained a reputation for being a gifted, sensitive physician. In summer 1954, through an acquaintance from Switzerland, he successfully applied to join Israeli public healthcare (specifically Kupat Holim Clalit) as a chirurgic physician.

In June 1948, several weeks after the State of Israel was established, the ‘Muslim Brotherhood’[1] planted two bombs inside ice cream carts, which were smuggled into the Jewish quarter in Cairo (Harat Al-Yahoud). One of the bombs was placed in the Karaite-Jewish zone, Al-Qara’In. The other was planted, where Rabbinical Jewish resided. The bombs killed twenty-two Jews. Following which, an Haganah representative in Egypt appointed Moshe to organize self-defense for the Jewish quarter. Moshe nominated his friend, Mayer Safran, as his deputy.

In 1949, Moshe and Mayer received alerts the ‘Muslim Brotherhood” was planning yet another attack on “Hartat Al Yahoud”. Well-prepared, they managed to thwart the plot, and did so, while putting themselves at great personal risk.

From 1950 onwards, at the request of the Israeli Mossad LeAliyah Beth, the institution for immigration, Moshe ran the medical examinations for potential ‘Olim’ who wished to immigrate from Egypt to Israel. In 1951, he was requested to accompany an elderly patient, who was hospitalized in the Jewish hospital in Cairo, on her way from Egypt to France, where her daughter lived. Upon arrival in Paris, Moshe took the opportunity of being away from Egypt and traveled to Israel, where he was recruited for the IDF intelligence Unit 131.

Within this framework, Moshe underwent military intelligence training during 1952 and was ranked Second Lieutenant. When he went back to Egypt, Moshe became the commander of the Cairo cell.

Back in Cairo, Moshe realized the nature of the task he and his team were assigned and expected to carry out. He also recognized their training was utterly insufficient in order to do so, and that the gap between the expectations from the cell and the actual capabilities on the ground – was too wide.  Sober, Moshe then warned commander of Unit 131, Lieutenant Colonel Moshe Ben-Zur, and told him the Israeli intelligence was jeopardizing its’ own people, for no good reason.

When Moshe realized his protest did not make any difference and the Israeli way of conduct remained as it was, he resigned and returned the communication device he used.

No one replaced Moshe following his resignation, and no one else was appointed as the commander of the Cairo cell, and so, it shriveled.

In summer 1954, the members of the Alexandria cell, were instructed to lay explosives and carry out several sabotage operations, which targeted public facilities in Alexandria and in Cairo. Within a short time after they began to run the actions, the members of the two cells were exposed, arrested, brutally interrogated and stood showcase trial. Most of them were sentenced to various imprisonment terms.

It was later discovered, Israeli officer Avri Elad, who was sent from Israel to operate them, was the one who betrayed the Jewish Egyptian groups and informed the Egyptian security services about them.

Elad assumed Moshe was still the commander of the Cairo cell and Moshe chose to not correct this false information.  Instead, when interrogated, Moshe accepted full responsibility for leading the two cells. He was fully aware of the deadly consequences of his choice and was willing to bear them: by accepting full responsibility, Moshe was hoping to at least save his comrades and subordinates from death penalty. In fact, he succeeded, with one exception, of Samuel Azar, who was the commander of the Alexandria cell.

Moshe Marzouk and Samuel Azar were sentenced to death by hanging. They were executed on January 31, 1955, in Cairo. Moshe’s last words were: “You should all leave this place and go over there (i.e – Israel). There is no future for you here”. Post mortem, IDF ranked both Moshe and Samuel Lieutenant Colonels.

Israeli media discussed the operation failure of the network under heavy censorship. When referred to the events, the reports used suggestive codes, such as “The Affair” or “The Nasty Business[2]“. It triggered political turmoil and scandal in Israel, which also lead to the fall of Israeli governments. More than half a century after the events took place, many issues related to “The Affair” remain unknown. Hopefully, in years to come, circumstances will allow to research further, seek and reveal the truth, with no fear.

On 19 April, 1977, the coffins of Samuel Azar and Moshe Marzouk arrived in Israel. Their remains were buried on 24 April, a day after the Israel’s Independence Day at the “Gallows executed section” on the top of the military cemetery on Mount Herzl, in Jerusalem.

Marking 60 years after the Lavon affair”

I stand before you deeply moved. After decades of refusal by the IDF to take any responsibility or be held accountable by openly referring in a critical manner to the events which took place in the summer of 1954 in Egypt, I now have the privilege to attend and participate in an event, which is all about sheer professionalism, critical approach, integrity and accountability.

I thank you – Head of the IDF Military Intelligence Directorate, for taking the initiative in holding this seminar, and I am grateful to the organizers who invited me to speak before you. Being so excited, I will read my message from my notes.

I would like to dedicate the short time available to me to outlining a few of the characteristics of the personality of my older brother, Lieutenant Colonel[3], Dr. Moshe Marzouk. I will do so by sharing with you two anecdotes which to me, are profoundly telling, and reflect and demonstrate Moshe’s inner world.

In May 1954, I traveled to France to attend to some family matters. I also went there to meet Moshe. At that time, I was already settled in Israel and underwent obligatory military service in the IDF, under status of ‘a lone soldier’ – I was the only one of my family in Israel.

Moshe and I stayed in the same hotel in Paris. One day, he came back very upset. I asked him what did upset him and he responded, “I can’t speak about it”. It was an unusual response, for we were very close. The entry in my diary that day goes: “Very depressed”. It expressed how helpless I felt, not being able to be there for my brother. When we said our goodbyes before Moshe left on his way back to Egypt, I was in tears. It was as if I felt, this was the last time we met.

It was only half a century later, when I was reading Isser Harel’s book “Brother against Brother”, that I was able to connect the dots. I then realized how that day, my brother had met Motke Ben-Zur, his commander, and it was the meeting with him, that unsettled him.

Commander of Unit 131, Ben-Zur stayed in Paris through May 1954 in order to closely follow the preparations before the activation of the Jewish network in Egypt. Before the end of the month, he summoned the commanders of the two cells in Paris. However, only Moshe and Israeli officer Avri Elad arrived. The commander of the Alexandria cell, Samuel Azar, stayed there as he was preparing Victor Levy, who was still a trainee, to take over the command of the cell.

Ben-Zur informed Moshe he intended to activate the cells in order to carry out sabotage missions. I assume Moshe was against is, because this task was not what they were recruited for. It was also not what the Jewish-Egyptian network was trained to do. Its’ members had no qualifications nor means to carry such operation out.

Due to the difference of opinion, Motke let Moshe off his position and duty. Motke also informed Moshe there was a professional position awaiting him in Israeli Beilinson hospital, as a surgeon. He urged Moshe to take a flight to Israel and accept that job. But Moshe said he would go back to Egypt and stay there for a few months before “making Aliyah” to Israel. Moshe said he was concerned that in his absence, Motke might take advantage of the innocent and enthusiastic group which comprised the Cairo, and would order the members to carry out operations that would put them at risk. For this reason, Motke explicitly instructed Avri Elad to only activate the Alexandria cell.

Moshe strongly objected to the sabotage operation. However, when, during his trial, Moshe was asked who was responsible for it, he replied:  ‘I was’. He understood what this answer would mean and came to terms with its’ consequences.

When Moshe heard the verdicts, he assumed his friend, Eli Naim, would be released from prison some day and would then make Aliyah and immigrate to Israel. Thus, he approached Naim, and asked him to convey me his triple request, which was, actually, his will:

Do not take my blood revenge.

Name your son, should you have one, after me.

Plant a tree in Israel, in my name.

Though the first request is articulated in a negative sentence, it is all positive in substance.  It reflects a worldview which is as sober as it is of high morals, individually as well as for the greater good.

I was delighted to fulfill the second wish. My first son’s name is Moshe Marzouk.

As for the third wish, Moshe could not imagine his remains would ever be buried in Israel. Therefore, he wished for a tree to represent him in the land, where he was deeply rooted.  Following nine years of persistent effort, with the kind, decisive help of First Lady, wife of the Israeli President, Ms. Rachel Yanai Ben Zvi, I managed to organize the plantation of a forest, named after the Martyrs of Cairo. The forest is located south to Jerusalem, under the “Yad Kennedy” memorial, nearby Khirbet Saadim. Today, it is a vibrant forest with sports facilities and signs of remembrance, which tell the story and convey the tale of ‘the Affair” and the biographies of its three victims: Lieutenant Colonel Meir Bineth, Lieutenant Colonel Samuel Azar and Lieutenant Colonel Dr. Moshe Marzouk.

I hope it is now clearer to see, what a man Moshe was: a sober, decent and modest man, a lover of this land, who was devoted and attached to his family the way he was to his nation.

Again, thank you for this opportunity to outline before you something of the character of my brother, Moshe, and telling you a bit more about who he was.